UPDATE 10/7/22: Considering the seriousness of the situation (Hurricane Ian devastation) and the whole job itself, this picture kinda says it all, doesn’t it?

10/4/22: For those empty shells willing to sell their souls in the name of hating & fearing Trump/MAGA, the Biden Crime Family’s brazen corruption is still “nothing to see” or perhaps “disinformation” or maybe “what everyone does.” Turning a blind eye to evil does not absolve one of guilt for it. In fact, over time, that stench will stick permanently to those allowing BrandonWorld to fester and thrive like the plague it is.

10/2/22: If The Joe & Kamala Show were a Broadway musical, it would have closed after one performance just to recoup the investment. Or, more likely to minimize damage and cost, it would’ve been shuttered immediately after the first cow town preview. Unfortunately in this form of “entertainment,” they’ll be laying an egg 8 times a week for two more years to totally papered houses. The overwhelming majority of those aware of the noise being broadcast out onto the street are simply going about their business, forced to endure the most gawd-awful singing since Florence Foster Jenkins. And waiting anxiously for a real quality production to replace this assault on their sensibilities.

UPDATE 10/5/22: And to think some naive types thought Norma Desmond…I mean Mrs. Bill Clinton was thinking about ANYTHING other than The Crown she was destined to wear.

No, she’s just “Biden” her time until the creepy old life form either gets the 25th Amendment boot or manages to survive in his vegetative state thru 2024. At that time, he can be neatly replaced by….oh…let’s see…who’s ready and willing to step in? 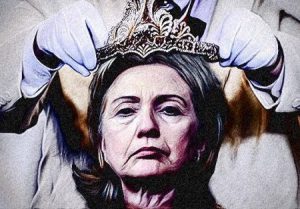