Minus a hat to throw, a fork to eat with, or a knife to drive into the heart of anyone whom she cares to humiliate, Amy “Minnesota Nice” Klobuchar has tossed her comb into the Presidential ring. 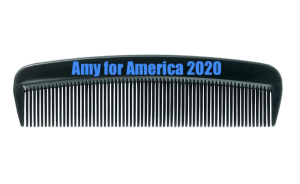 For those not yet familiar with her SPECIAL gifts for staff management and inspired leadership, read about Amy’s SPECIAL relationship with employees and unique eating utensils at the NY Times, Buzzfeed, the Huffington Post, the Atlantic, Vanity Fair, none exactly MAGA outposts. 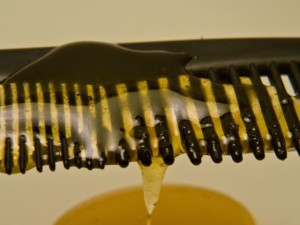 The thing with the comb has to be her special signature piece and a gift to all admirers of those celebrated, passionate egalitarians on the Left, always, always, always mysteriously more equal than other animals. 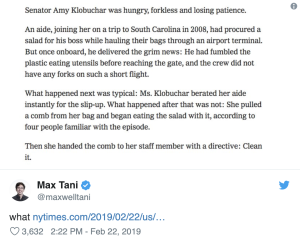 To go with Left-lurchers Cory & Kamala (and doddering Old White Men Joe & Bernie) , the masochistic Dems are further treating themselves here to a crude Midwestern thug with a special, kinky, well-documented predilection for humiliation and abuse. Hey! If that’s what it takes to “get the job done,” so be it…if the job is to turn America into the USSA and Americans into willing Serfs of Socialism. Lucky Leftists: another perfect choice from the Party Of The Little People, the disenfranchised, the poor, the diseased, the lowly, the unwanted, the forgotten, the victimized. Who better to look down on  the contemptible millions of filthy, untouchable riff-raff  who will always disappoint Madame…and provide her with political power? 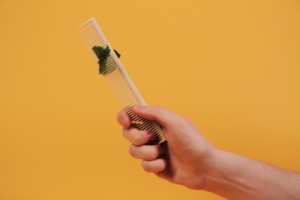 The mind reels: here we are only 2 years past Hillary’s expulsion from the Prog Politburo, yet now, in fond, nostalgic retrospect, Bill Clinton’s ruthless partner-in-crime is coming off as almost moderate, even maternal, quaint, homey in comparison to The Klob and her Commie compatriots Cory, Kamala & Company.

Apparently, the rise of radical Leftist and would-be Global Puppet King Obama was just the start, and this new crop including aspiring Commissars like Klobuchar is the ominous present.

2 Replies to “Klean-My-Komb Klobuchar For Prez!!! No one’s in love with Amy, not even the NY Times.”