UPDATE 3/2/20: Anticipating a move to the White House next January, Bernie tries out tyrant face hair in homage to past totalitarian leaders! What? No Adolf smudge? 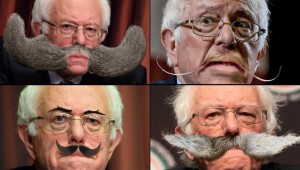 UPDATE 3/1/20: Wild-Haired Bernie The Red Anti-Semite Democratic Socialist Moscow Honeymooner now a real contender to be the captain of the Donkey Titanic!! An Israel-hating Jew, a millionaire advocate of Universal Income Equality with three homes, Santa Claus/Robin Hood to hundreds of millions, The One! What’s not to like? 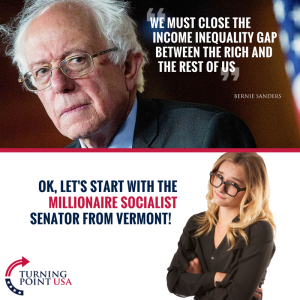 UPDATE 6/30/19: The new, improved Red Bernie 2019 model now vying for the 2020 nomination has competition for Big Giveaways that someone else will foot. But he’s holding his own, totally forgiving college debt among other trillion dollar Party favors to be handed out to the eternally gullible.

UPDATE 7/10/18: An image to cherish-selfless socialists Bernie & Blas, relaxing lakeside at Bernie’s 3rd residence, his vacation home on Lake Champlain, casually planning their next assault on income inequality and the greedy One Percent. All for The Little People!

UPDATE 6/24/18: Highly paid professional socialist Bernie raking it in like crazy. Just bought a third house, at the beach! It pays  to rail against people who make money!

UPDATE 3/27/18: Rewriting the Guinness Book of World Records for shameless hypocrisy, the generous Share The Wealth Presidential candidate joins forces with two of his most money-grubbing fellow socialists to solve the problem of “Income Inequality.” While, of course, giving up nary a penny of their own multi-millions.

Once just the oddball self-proclaimed Socialist of the Senate, Bernie’s moved up to the front these days. Maybe that’s because he’s just another slinky Democrat appealing to the basest of the Leftist Base which always includes the dependably stupid Youth vote.     Doubtless, now that Hillary is showing chinks in her armor, we’ll be hearing more from him. After all, we’ve been told, we’re all Socialists now …if you happen to believe that taking from the rich and giving to the entitled poor (and not so poor) is The Answer.

12 Replies to “Bernie Sanders: Formerly a stigma, Socialism is heating up as
the latest cool thing for the Demo Party.”