UPDATE 2/2617: Dems go full Far Left Progresso and elect Perez Chavez chum Chair of Dem Party.  Trump tweets “Congratulations to Thomas Perez, who has just been named Chairman of the DNC. I could not be happier for him, or for the Republican Party!” to which Perez promises to be the President’s “worst nightmare.” In case there’s any doubt about how far around the bend the Dem Donkey has gone, he’s named runner-up Keith Ellison his new BFF and “Deputy Chair.”  There’s a whole lotta Community Organizin’ goin’ on! But what if all those extorted tax/corporate/foundation dollars are no longer so freely available to buy new Democratic votes?

UPDATE 2/7/17: The Dems no longer making any pretense of moderation, this historically committed Marxist is leading contender for DNC Chairmanship, the alternative being jihad-friendly Minnesota Muslim Keith Ellison. What would Humbert Humphrey, Scoop Jackson, JFK, even FDR have to say about their Democratic Party?

Another Harvard Obamanite nominated [& confirmed July, 2013] for Cabinet Labor Secretary so predictably radical that he already has a place among the Michelle-Antoinette Family.  No matter if he’s confirmed or not. Obama and Co. make no pretense of being anything less than “transformational” these days, what we used to call revolutionary Marxism in the old days. And now, straight from the “the Hugo Chavez-wing of the Democrat Party… (Not an exaggeration: Chavez once had Citgo make a payment to Perez’s illegal alien advocacy group Casa de Maryland.)” And arguments against just another variation of a “community organizer” continue to pile up. 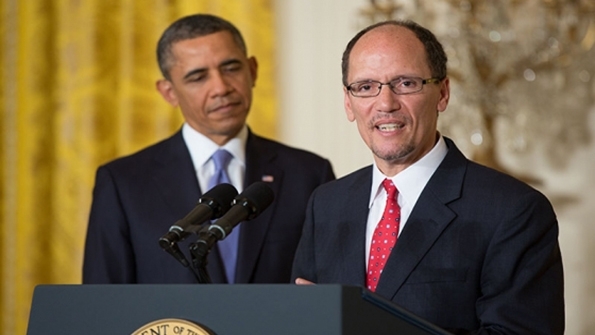