Skip to content
By: Fred Posted on November 5, 2012May 9, 2021
UPDATE 5/9/21: A lifetime of treason and treachery has logically led to the latest revelation about Kerry’s ratting out Israel’s defense plans to his Iranian comrades. This Green enthusiast who flies all around the world in private jets also has invested heavily in oil and gas stocks. You know, those awful fossil fuels that will keep the world running long after the unreliable renewable energy sources are long gone with the wind. 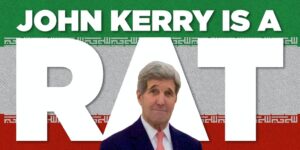 It also appears that his continued prominent presence in the Biden administration may be due to what he has on the Biden crime family and their Red Chinese connections. More and more, as malfeasance is held unaccountable and shock non-existent, inroads of tyranny are further solidified.

UPDATE 4/25/21: One venerable pundit has opined that, in his 80+years, Jean Fraud Kerry counts as the most destructive American on record. So many to choose from these days for title of “Worst” [see Pelosi, see Biden…] but a lifetime of fraudulent self-promotion, gold digging and one long lying career certainly makes him a contender. Surely his recent comment about how “we…have to get carbon dioxide out of the atmosphere”  has to put him high in the ranks of the stupidest, most ignorant “public servants” still roaming unattended without a leash in our halls of government.

Kerry’s latest contribution to his native land is to outsource all our manufacturing to the Chinese and to make us dependent upon them for everything we need. Throw in this Climate Change/CO2 expert’s  vow to destroy our fossil fuel energy independence in favor of Green solar & wind technology (monopolized by China), and the fake Hanoi Hero roars right up alongside the seamy likes of Carter, the Clintons and Obama in the Most Terrible Trophy sweepstakes. In all fairness, perhaps we should wait until we find ourselves running up demerits on our social credit scores and energy-starved America looks as dark as North Korea from space before making up our minds. 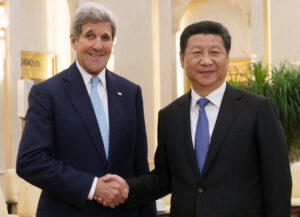 UPDATE 7/23/16: As long as we’ve got ISIS on the run, John tells us that refrigerators and air conditioning comprise a much greater threat to us than ISIS anyhow! All such ecologically terrorizing devices and comforts have summarily been removed from all of the Kerry homes, yachts and cars….oh…they haven’t? No problem. We know he’ll get to it. Anyhow, we want to assure him that we have these diabolical cooling golems on the run, so he can tend to the minor business of finishing off those obsolete JV terrorists. Maybe he can airdrop all those turned-in killer fridges & coolers on them and do a double save of the planet! [cue in “Outer Limits” theme.]

UPDATE 7/3/16: John Fraud Kerry, stellar successor to Mrs. Bill Clinton as Secretary of State, reminiscent of Churchillian grandeur, reassures us that each successive attack by ISIS is a victory of the Obama administration over Islamic terror. This is blather too stupid, silly and ridiculous to even rise to the level of Orwellian Newspeak.

Poseur, fraud, fortune-hunter, snob, hypocrite, opportunist, liar, almost President. Thanks be to  God…and to those who voted for Bush in 2004. Supposedly, he lost because he was “SwiftBoated,” a term that the Orwellian Demo squads defined as slandering/smearing/lying.

Unfortunately for Kerry, SwiftBoating actually means telling the truth about someone as backed up by the testimony of a large number of very reliable, honorable men. Nice try anyhow.