UPDATE 6/8/21: Not the Babylon Bee or any other parody. St. Greta is at it again. The annoying little Nordic, anointed leader of civilization’s column of progress, speaks now for a certain voiceless demographic unable to express its “thoughts and feelings”: fish. “And the child shall lead you”…in this case, over the cliff.

UPDATE 2/12/20: Greta T, burgeoning multimedia Diva, ready for her close-up…OR ELSE! . Not to be confused with Patty McCormack. 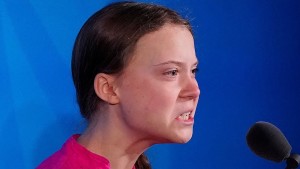 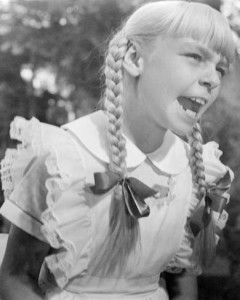 UPDATE 1/1/20: Our Nordic nitwit has laid out a whole smorgasbord of demands, presumably to be met immediately! We grant that the girl is versatile, not merely a Climate Change scold but an all-purpose Progressive nag: ““The climate crisis is not just about the environment. It is a crisis of human rights, of justice and of political will. Colonial, racist and patriarchal systems of oppression have created and fueled it. We need to dismantle them all.” Okey dokey. Right away, M’lady! Done!

UPDATE 12/3/19: For Christmas and year-round: a Greta Grinch Scolding Doll to keep you pure, righteous and “woke!” 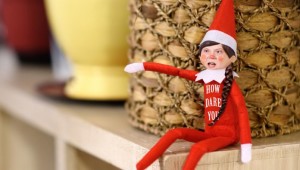 UPDATE 11/11/19: A sensible letter of response from a sane adult, reminding this romanticized political prop and her ignorant, self-indulgent enablers of the Dark Ages they advocate.

ORIGINAL POST 9/20/19: In the enviro-religion outpost of the relentless Left, Swedish Climate Activist, Greta “Scoldilocks” Thunberg has been shoved center stage in ProgressoWorld’s  ongoing attempt to overthrow capitalism in favor of an ever-magical fabled Marxist paradise. As the Master Planners will stop at nothing, it’s business-as-usual to exploit a mentally ill child as the poster girl for Climate Change and a world “purified” of fossil fuels. And like the anti-gun kids, this one also has the diabolical George Soros’ funding behind it.

Literally sailing in on the wind like a SJW Peter Pan with braids, this demented Pippi Longstocking reads a carefully prepared script at the UN accusing the mean old Free World of “mass extinction” in…oh…about 10 years. Maybe it’s 12 if one is to go by AOC’s daft timetable. 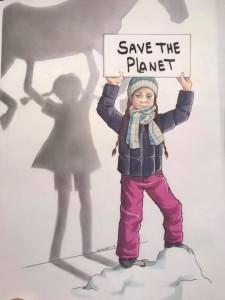 Aside from the annoying noise made by the One Worlders, one ponders the fate of this unstable pawn of activist stage parents and the fanatical Left. What is her future a decade down the line when the world somehow continues whirling on its axis right on past any fictitious Armageddon she’s been led to believe awaits her?

The power of using a child for agit-prop and lies is apt for a mass movement that preys on the ignorant, fearful and infantile. Aside from those very few Elite getting rich and powerful off of this totalitarian message, what are the old and young fools swallowing this nonsense…except naïve, impressionable children in endless search of that ultimate protector, Big Brother?

13 Replies to “Greta “The Grinch” Thunberg”