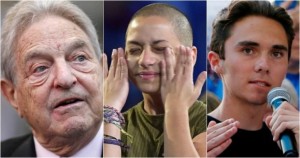 UPDATE 9/1/18: Squeaky David Hogg faces down Smith & Wesson. Awesome. Like Gary Cooper. “Full of himself” a meager description of The Geeky Gun Hater’s latest foray into being The Biggest Little Dictator In The Whole Wide World. Who, one wonders, is telling this deluded teen that he’s the Second Coming? The answer is: other irrational children who happen to reside in adult bodies, like him fervently insisting that the world is shaped to their desires and wishes and good intentions…despite the reality that it isn’t.

UPDATE 6/23/18: He demanding the end of self-protection for the rest of us decides he’s the exception and important enough to warrant armed protection. How interesting it would be to know who’s paying for that special heat-packing for the Golden Boy of gun control.

UPDATE 4/2/18: Media” Hogg can’t keep his story lines straight even with audible prompting going on behind him.

UPDATE 4/2/18: Deemed “nasty and vile,” “Media” Hogg has no fan base among those fellow students who actually lost siblings, such as Patrick Petty, Kyle Kashuv or Hunter Pollack. Living up to his new nickname, Hogg sucks all the air and face time out of the media which inevitably will tire of him when he no longer serves his purpose for them. 15, 14, 13, 12, 11, 10, 9….

ORIGINAL POST 3/25/18: Thanks to their Big 15 Minutes in Prog Show Biz now feverishly underway to make them media stars, teenagers David Hogg and Emma Gonzalez have the distinction of being the youngest Michelle-Antoinettes to date. Normally, one would give these kids a break and just tell them to brush up on  American civics and live a few years to learn how and which people and societies succeed or fail. But their all-too-willing participation in what is just one more humungous Prog-Prop nuking of America exempts them from pardon. These are Children of the Demmed already fully gestated, hatched and loosed on the world.

Quick lesson: America and Israel are good models to emulate since they confer individual rights and adult responsibilities on their citizens, and they are the most innovative and prosperous societies providing the greatest good for the greatest number of any nations on earth, ever. Bad models are those increasingly Socialized European nations in the throes of slow suicide with their open-border immigration policies and crippling dependence of the populace on government subsidies. Of special interest to the young Hoggs and Gonzalezes: these countries have outlawed weapons of self-defense for individual citizens and even the police, allowing violent criminals to be the ones with guns and lethal power. Is it by pure chance that America and Israel (neither gun-free zones) are top of the list these days to be branded the enemies of humanity, standing in the way of open borders, a disarmed citizenry, centralized, Socialized, government- controlled everything?

Naturally, such lessons fall on deaf ears for Hogg, a tad too arrogant and enthused about becoming an instant celebrity, fawned over (and heavily funded) by the Obamas, Soros, Oprah, Spielberg and Clooney. And in their demands for Safe Spaces, banning guns,  Never Again! and the like, The Children are just pawns in the oldest and evilest game going: turning whole countries of chronological “adults” into helpless infants, subject to the whims of a few Elite masters and political criminals who are never ones to let a good crisis go to waste.

Herewith is a quick solution to the Gun Problem, anything but theoretical. Of course, it’s too easy, rational, humane and real to be taken to heart by the “Children’s Crusade” and its cynical “adult” enablers.

At the heavily publicized March For Our Lives, Hogg’s ObamaJugend comrade and newly-minted media darling Emma Gonzalez staged a 6 minute silence dramatizing the time it took that killer to take out 17 lives at Parkland. Not mysteriously, very little mention has been made of what was barely the 60 seconds it took an armed adult at a Maryland school this very week to dispatch another would-be mass murderer. Is it a mystery that little or no mention has been made  of the minutes, hours, days, months and years that happily lie ahead for the innocent lives preserved by one “good guy with a gun?” Similar examples and real solutions to The Gun Problem abound, in the past, present and future of what has always been and always will be a dangerous world full of lunatics. Admittedly, real solutions like armed responsible adults defending the undefended makes phony “Marches For Our Lives” irrelevant and exposed as just the mass round-ups of the young, stupid and gullible that they are.

Meanwhile,  real adults in this nation and elsewhere arm themselves, obey the few simple laws our Founders provided and hope these young people follow suit and live out their lives as the productive, responsible adults of tomorrow, not the destructive instruments of the nihilism currently peddled to them: “transformation,” “hope and change,” “you didn’t build that.” All so dismally reminiscent of those other Causes, Movements and Marches in Germany, Russia, Cuba, Venezuela, South Africa and elsewhere that went and will always go so very, very bad.