And take a real look inside the blatant graft, corruption and self-enrichment of wonder boy Hunter Biden, courtesy of certain family connections. History will have quite the time explaining how, somehow, in this upside-down world,  the Biden family skates, Joe gets to be the Dem nominee, and Trump is impeached. Do take a good look inside!

There are demagogues, and then there are cackling witches, insane with power and the fear of losing it. Cheering the BLM/AntiFa destroyers on, the Speaker of the House, firmly establishes herself as an active force of pure evil. The politics of extortion, give us our way or the cities burn. How very reminiscent of Dem strategy the last election cycle. Do they know, will they admit, do they even care that there are terrible consequences to their violent rhetoric for average Americans across the country?

UPDATE 9/25/20: Additional halo tarnish on Woke Feminism’s Supreme icon: a glaring dearth [like almost Zero) of minorities among her staff. The old compassionate Prog Lib hypocrisy: Affirmative Action for thee, not for me.  Do as I say, not as I do.  Granting her some common sense, it’s possible she wanted the best person for the job, not the most politically correct. Clear instances of her judicial activism-going for her preferred outcome vs. what the law decrees-is further evidence of St. Ruth’s serious judicial shortcomings.

UPDATE 9/22/20: In refusing to retire in 2010 & 2o13 to make way for an equally Progressive replacement, even her Left-leaning advocates admit that Ginsburg put her personal politics ahead of the Supreme Court’s future. Hard to admit this “saint” was as into her own rock star status as mere mortals tend to be.

UPDATE 9/21/20: As suspected and amply demonstrated, Mme. Ginsburg was selective about her absolute fidelity to the letter of the law. Her now-celebrated “fervent last wish” regarding timing for her replacement was a Democrat speaking, not a principled jurist.

Re-examining her takes on abortion, motherhood and eugenics (“Frankly I had thought that at the time Roe was decided, there was concern about population growth and particularly growth in populations that we don’t want to have too many of,”), one is chillingly confronted with a Margaret Sanger disciple. 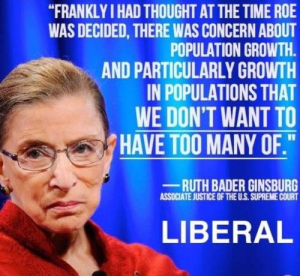 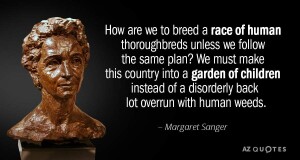 UPDATE 9/23/20: The billionaire pest who won’t go away is now buying votes in FLA: the debts of 32,000 Black & Hispanic felons paid off! Sort of the same deal Inner City Blacks have been granted by the Democratic Party for 50 years, this one an overnight windfall…in exchange for voting Dem. How generous, how compassionate. Except it’s illegal. But when has that stopped rich Progs above all that?

UPDATE 9/21/20: Apparently still the envy of other washed-up teeny boppers heading toward 90, Jane gets puff-pieced by NY Times drudge Maureen Dowd, hyperbolically dubbed “Intergalactic Eco-Warrior.” Whew. But for all the incessant puff, she’s remains the same rich, spoiled brat and public nuisance we have tolerated all these years.

UPDATE 9/25/20: Crenshaw continues his rise as one of the best hopes for post-Trump America and Conservatism. This remarkable ad in which he is one of six Texans on the ballot is one of a number of media masterpieces  leading up to the election, each one irresistibly infused with love of country and true American spirit.

UPDATE 9/27/20: The scare tactics of daily “case counts” proves to be yet another hoax designed to keep the masses in masked/distanced mode. Panic, as any politically savvy Dem will attest, is a crisis that should not go to waste. Note 4 figure numbers of “cases” and the numbers of hospitalizations( 0, zero, nada) and deaths(0, zero, nada). Disappointing news to the quivering inhabitants of that region of the Twilight Zone known as Safe New World. 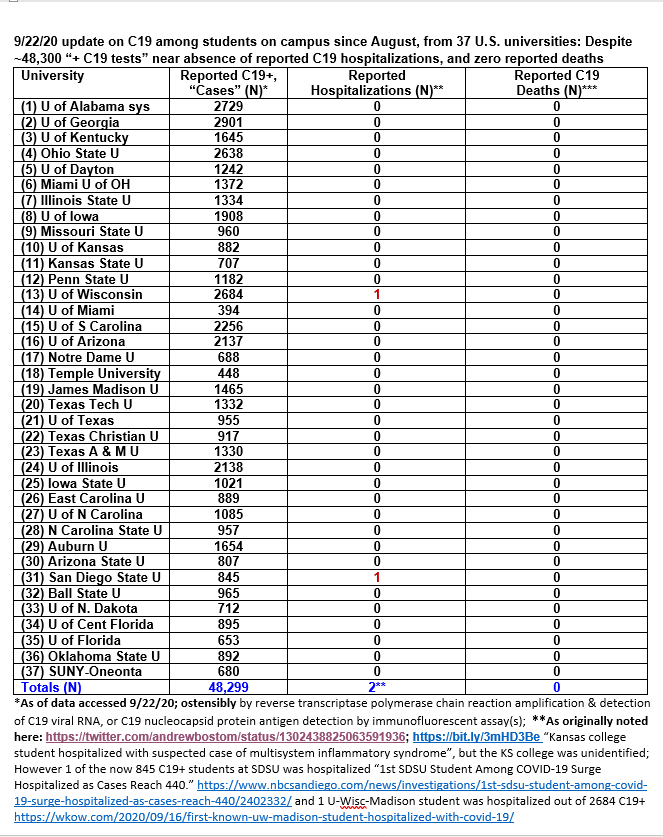 UPDATE 9/23/20:  Read the figures and weep for those lives ruined by this totally politicized over-reaction to CV-19. To restate the obvious: the cure most definitely has been worse than the disease.

“We expect the Democrats to avoid and ignore facts and numbers that contradict their coronavirus narrative. One, they want to voters to live in fear and take it out on the Trump White House and Republican senators in November. Two, Democratic governors and mayors have had a taste of expanded authority over an ostensibly free people and don’t want to let go of that raw power – it’s exactly what they live for.”

Exactly what they live for. What will be the next crisis not to go to waste?

UPDATE 9/26/20: Listen to Charlie Kirk for 5 minutes for a clear explanation of why we are cheering on Donald Trump.

UPDATE 9/26/20: There are solid reasons to think this woman is a real Conservative’s choice for The Court. Based on her life and experience, she’s a good bet to handily withstand the vicious gauntlet she’s about to run.

UPDATE 9/24/20: Blacks are waking up in numbers scary to their Dem handlers still taking them for granted. The dependent, enslaved Inner City voting blocs (and the resultant generational poverty) are shaking off the chains that bind them. 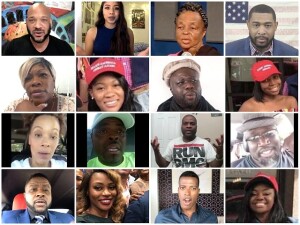 UPDATE 9/24/20: Add Breonna Taylor to the list of manufactured “martyrs” usefully exploited in full service to BLM/AntiFa/Dem Party propaganda. As in the case of Trayvon Martin, Michael Brown, Freddy Gray, Jacob Blake, it’s a lie. And once again, after careful investigation, no police malfeasance, just legitimate response to some historically bad actors. In Taylor’s case, a very, very bad choice of boy friends. Exoneration of police officers provides a difficult day for the America-hating anarchists, especially if the law justifiably fights back in court. Meanwhile, a new yet-to-be-identified and soon-to-be-dead young Black is slated for exploitable sacrifice in the AnarchoDem holding tank. 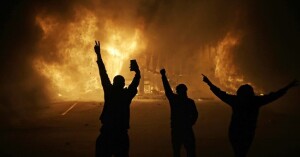 UPDATE 9/23/20: Leftists find it hard to imagine that the nefarious schemes they hatch will come back to haunt them, being held to their own standards for others. It’s just not fair. One of many variations of NIMBY(Not In My Back Yard). 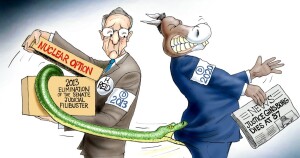 UPDATE 9/22/20: The nice White neighborhoods of Minneapolis, [and Dallas and wherever else the privileged, guilt-ridden cozily reside] now dotted with prominent signs supporting BLM, Biden, Wokeness. It’s almost comical to watch these fools delude themselves into thinking their signs of sympathy automatically grant them immunity from the mob. This stupid suicidal stance won’t change a whit, even when their property burns and they find themselves on the wrong end of sharp, hard, explosive implements of destruction. But that’s just the standard folly of the Good Liberal, smug in his/her guilt-driven, suicidal compassion for the criminal element of humanity. 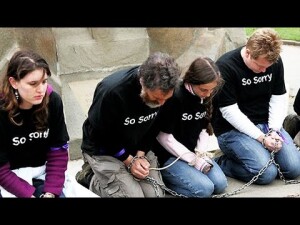 UPDATE 9/24/20: If you thought the original ad was good, the sequel is out of the park. Watch this refreshing new voice say all the things Conservatives want to hear said, what all rational people genuinely desire for themselves and their fellow citizens. Kim Klacik=Dynamite! Walk with her!

UPDATE 9/23/20: In case the nice folks over at Fox wonder why George Soros is “a person of interest” in the Left’s ongoing attempt to permanently transform America into Venezuela, check out the hand-picked snakey recipients of his largesse.

UPDATE 9/22/20: The mystery deepens regarding Fox and its clear avoidance of the Soros’ subject. Now they (or someone in social media) are editing any discussion of him, even in Tucker Carlson’s commentary. Spooky, like George himself. Has this ghoul bought off Fox News too?

UPDATE 9/25/20: Finding thousands of mailed-in military votes in a Wisconsin ditch, ALL for Trump, ditto in Pennsylvania, bears out real concern for bigtime voting fraud. But not for Democrats trying anything within grasp to sabotage the election.