UPDATE 4/11/18: Aunt Potty calls Cousin Kettle black and comes off again as the clueless gum flapper she is. This time she’s warning us about the signs of fascism in…no, not her cronies on the Left…surprise…Donald Trump.

UPDATE 1/26/17: Protesting Trump’s enforcement of existing immigration laws fires up Mad’s (and Sister Gloria’s) ecumenical spirit, terrifying us all by threatening to “register as a Muslim.” Born a Jew, raised Catholic, a converted Episcopalian, now just about to face Mecca every morning before breakfast on her L.L. Bean prayer mat, life is a spiritual smorgasbord for this perfectly ridiculous old bat.

UPDATE 2/14/16: Typical Leftwing brothel Madam tells her underling girls around America that that they are entitled to free-thinking, independent lives so long as they support Hillary and not someone more to their own liking. It’s Mrs. William J. Clinton OR… it’s “a special place in hell.” As Jack Benny used to say, “I’m thinking, I’m thinking…”

Former Secretary of State under Clinton, a valuable old relic for study with regard to the [in]effectiveness of a modern liberal foreign policy. To advance American, pro-freedom, pro-Western values, Madeline would in her day… 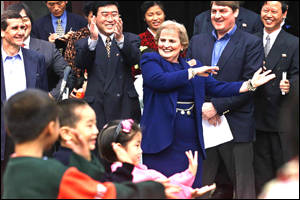 …suck up to their psychotic tormentor and assure everyone’s he’s “not a nut” ; 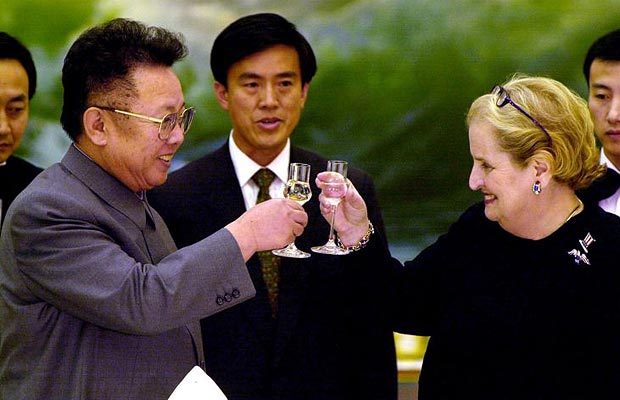 …coddle & cozy up to the worst, most murderous anti-semite of modern times since Hitler and make him an honored White House visitor during the Clinton years. 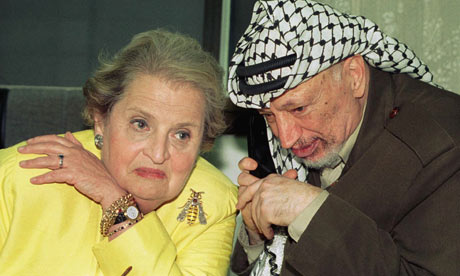 Madeline’s Way (which has proven to be Barack & Hillary’s Way too): mollify, appease, bow & apologize to every possible, sworn enemy of the United States. One all-bright Albright notion to advance American interests: don’t upset them with names like “Rogue Nations” but make it nicer with “States of Concern!” Twenty years later, we marvel at the wise, foresighted woman’s touch of addressing those who vow to kill & bury us in kinder, gentler terms.

Dear Aunt Mad, you call yourself a Diplomat, a Dignitary and still you get mistaken by Albanians for the cleaning lady… or a Mandarin princess.

Oh, and as your career really takes off, you conveniently leak the fact that you’re Jewish before anyone discovers you’ve been covering it up for most of your life. Don’t be modest by forgetting to show off a Secretary of State’s unique understanding of human nature, particularly of men in power, and make excuses for your transparently philandering White House boss. Ever the shrewd, graceful diplomat.

Emphasizing Madeline’s place among the Michelle-Antoinettes of current times, 20 years later, she now carries water for yet another conman, this one the current White House occupant, by granting his political opponent Mitt Romney a C in foreign policy smarts when she never even managed to score an F. Ever the wise old owl, 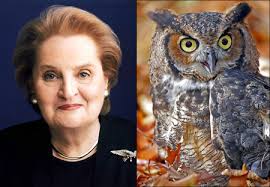 …or maybe just a cranky old bird, we continue to tolerate the unsolicited opinions of a rather silly, self-important woman who calls herself (hopefully) a “professor”: 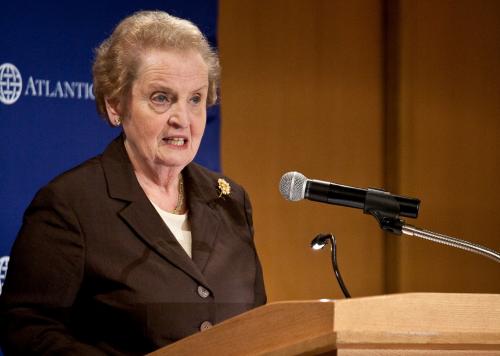 Every sluggish word out of opinionated battle axes like Miss Madeline must be repeatedly endured, like indulging a tiresome old aunt who has never stopped lamenting that she could’ve  been Ginger Rogers except she wouldn’t put out for the RKO talent scout. In Madeline’s case, she DID put out for every devious man who either employed her(Clinton), or meeting her across a negotiating table used her like the useful idiot she is.

We all know Gene Krupa, and, Madeline, you’re still no Gene Krupa. 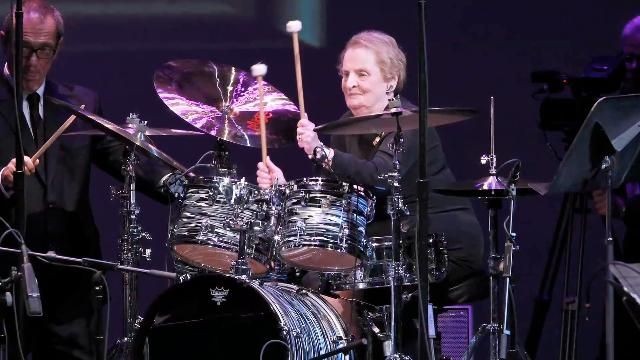