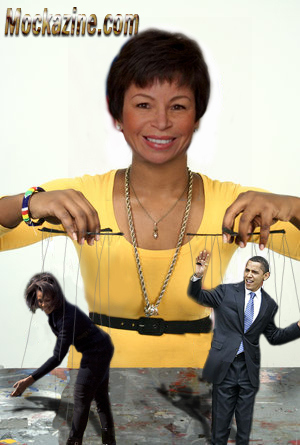 UPDATE 3/6/17: Madame Val’s covert war on America continues from her bunker in the Obamas’ post-prexy DC digs. In her mind (and by extension the minds of her gracious hosts), this is Barack’s third term to carry on their sinister “transformation.”. One wishes they would go away, but such people addicted to power and bringing  free movement of any kind to heel never go away…except by force.

Without Valerie Jarrett, Michelle & Barack would still be two 3rd tier Chicago Alinkskyites feeding off the Windy City troughs. We have much to “thank” her for, not least of all ObamaCare and the ongoing destruction of millions of American lives and the our entire free way. of life.

Who is Valerie Bowman Jarrett? For starters, check out her family tree, fiery Red sap coursing through it like something out of a Fifties sci-fi horror flick .

Officially “senior adviser and assistant to the president for intergovernmental affairs and  public engagement,” she is the Rasputin, the Svengali, even the Pygmalion behind the whole Obama fantasy play. Her story starts as the child of prominent Leftwing diplomats, then kicks into high political gear with her marriage to the son of Chicago Marxist royalty Vernon Jarrett.  Jarrett’s personal odyssey wades chin-deep through the dankest swamps of Chicago politics and corruption, peaking with the meeting & grooming of both Michelle Robinson and Barack Obama, individually and as a power team. Through the Obamas, she has become the envy of 2 centuries of Marxist powermongers, itching to infiltrate and undermine the United States and free market capitalism in general.

Valerie Jarrett is Al Capone and Ma Barker wrapped up in one.  a Chicago gangster, albeit, to paraphrase Noel Coward’s description of the nice gentlemen running Las Vegas, a gangster with good manners.  She dresses and speaks like the privileged, exclusively schooled millionairess she is, and that is the insidious aspect to the whole Obama story.  The march of One World Socialism, the Marxist dream, the ultimate totalitarian nightmare has changed its image. No more grubby, bomb-throwing, bearded shags cranking out pamphlets on the ditto machine. How & why would a Communist dress & live like a capitalist? Simple. Communism is about a small Elite ruling over the masses, and guess where Valerie, Barack, Michelle, David and the rest of the Michelle-Antoinettes see themselves as part of that tidy “dialectic?” Certainly not among the rabble. They are our superiors, and they will dictate what is good for us. That’s what dictators do, they don’t ask, they don’t serve, they dictate.

Maybe the one that will sink the whole ship. 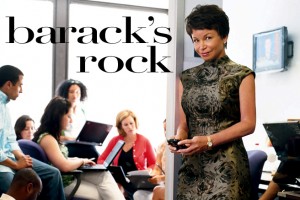 That’s our job. To make sure everyone gets their fair share of the pie as long as we get the biggest piece, and we do the carving. A few of us are meant to rule, and the rest of you will just have to settle for the crumbs. 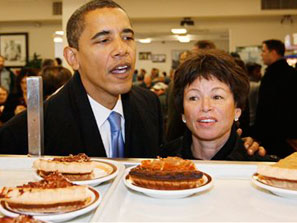 Here she is teasing the hapless Hillary and her single “convenient device.” Actually, Val’s not as fun & smart as she looks, and she isn’t even that smart. Just cunning and accustomed to getting her way. That’s a rich red diaper baby for you.