Over the line and annoying as ever, this specimen lives to stink up the place and get attention to the detriment of all society above the developmental level of an amoeba. Really just another limousine Stalinist (with his very own Cayman Island tax shelters) possessing the persuasive finesse of Al Capone. Lie, slander, bully, accuse the opposition of everything he himself is, and you have the flatulent misfortune known as Alan Grayson. Imagine being married to this bottom feeder.

An illustrious history as the biggest jerk in Congress, a greasy mass of germs & week-old fish that slithers among us, begging to be quarantined and eradicated.

Separated at birth from womb-mates Roseann Barr and Michael Moore, the ugly ungainly bully slob gross-out king outgrossing all the competition. Barely human, he’s the one who breaks all the rules, does and says the unthinkable and serves the Progressive cause of absorption of all into a mindless collective. The useful pride of the Democratic Party.

Remember him from fifth grade? The one willing to eat dog droppings on a dare? All to prove he would do anything if so moved. People uninihibited by basic decency wield the power of the lunatic on the loose.

This is what you get when truth, civilized behavior and individual dignity cease to matter, and the mindless, heartless cudgel of the State rules your life. Alan Grayson is the face of that State. Embrace it at your own risk. 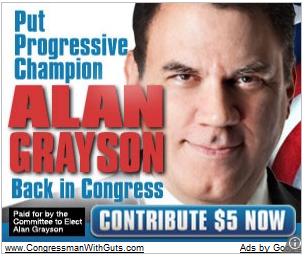 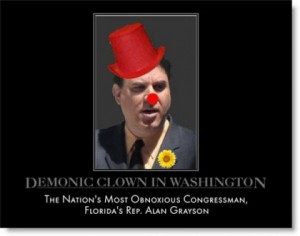