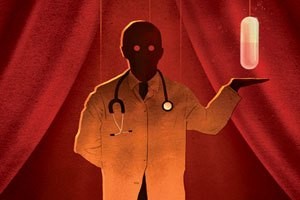 UPDATE 10/13/20: A high-up WHO official gives an interview to the Spectator and says maybe lockdowns are not a good idea, in fact, a terrible idea, not even a last resort option. Mass unemployment, a spike in worldwide poverty, psychological devastation. Now they tell us.

ORIGINAL POST 3/22/20: The threat of viral biological disease is a given on this planet. Unfortunately, so is the presence of viral dissemblance by a whole parade of scoundrels in positions of power and the irrational response it predictably evokes in the malleable masses.

This latest insanity surrounding the Corona virus can be partially linked to the unwarranted trust millions place in  so-called voices of authority such as the World Health Organization (WHO), a key branch of the United Nations (UN). Anything connected to the UN should be suspect as it is and has always been a corrupt instrument in service to One World Government, centralized control of all human activity, all cloaked in the beguiling garb of global “peace and harmony” of course.

Currently, the head of WHO is one Tedros Adhanom Ghebreyesus, an Ethiopian Leninist/Marxist activist who, good Communist that he is, has promoted the vile Zimbabwean dictator Mugabe as the organization’s international ambassador of good will for universal health. This is somewhat akin to appointing the noted Nazi Adolf Eichmann as a spokesman for the chicken soup lobby catering to world Jewry.

Similar Social Justice activism (and spurious scientific evidence) infects nearly every WHO pronouncement as in the case of championing ObamaCare or fretting over the “stigma” that border control and quarantine supposedly has on illegal immigrants carrying infectious disease from abroad. This so-called crime takes precedence over disease itself!

Right on cue, WHO weeps for “Palestinians” and decries the heartless Israeli “occupation” and sundry historical sins against their innocent Arab brothers and sisters. Include the intentiontal infliction of disease on the helpless and poor as just one of countless Jewish acts of evil despite the fact that Israel provides the only modern and truly humane healthcare system to all (including Muslims) in the entire Middle Eastern region. Needless to say, China’s central, pivotal, Ground Zero role in the current crisis has been, by passive default, downplayed by WHO.

Unfortunately, this Leftist activism als0 taints our own Center For Disease Control, likewise driven by Leftist activism, not science. And then there’s the avuncular Dr. Fauci of the NIH, calm and measured in 2009, sounding all alarms to panic in 2020. They now join the FBI and CIA of recent Mueller/Russian Collusion notoriety, Deep State deep rot, formerly steadfast forces of “truth, justice and the American Way” now a Pollyannish fancy.  Whom to trust? Apparently, not WHO or CDC or professional medical bureaucrats. Perhaps only our own eyes and ears and gut.

9 Replies to “Who is W.H.O.(World Health Organization)?”