The dilemma of befuddled “moderate” Democrats (Bidenites) having to accommodate Bernie’s Radical Red Guard  is fast becoming the favorite spectator sport for Conservatives in the Trump Era, 2020. One exults in witnessing a nasty little tiff that took place on CNN this week between perfect reps of these antagonistic Dem factions. 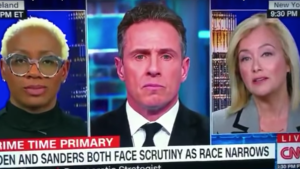 In this corner, we have ham-handed Dem pundit and “fixer” Hilary Rosen, fondly recalled for insulting millions of American homemakers back in 2012 by accusing  GOP Candidate wife Ann Romney of “never [having] worked a day in her life,” despite having raised five children.  In the other corner, pitted against calm, reasoned Hilary, a scowling Bernie pit bull/Angela Davis clone named Nina Turner. Refereeing this CNN drama, the ever-redoubtable Chris “Fredo” Cuomo.

The bell sounded, and each made her predictable pitch for her chosen Old White Dem Man. Things got tetchy when  Nina, in service to Bernie’s Venezuelan Dream for America, quoted MLK dissing “white moderates” in his celebrated Letter From Birmingham Jail. White moderate Hilary got desperately defensive and told Nina “you don’t have the standing” to quote MLK as a weapon against reputed Civil Rights hero Joe Biden.   Black Nina didn’t like being scolded by Ms. Whitey for quoting MLK.  Ka-boom!

It didn’t help when, in her pathetic, apologetic follow-ups on Twitter, Hilary lumped in the ever-cheery Nina as one of those “Angry Black Women” (clearly Turner’s chosen “look.”).

Remember Tom Wolfe’s satirical odes to race-baiting extortion, “Mau-Mauing The Flak Catchers” and “Radical Chic?”  Nothing makes the White Liberal quake and fold like Angry Blacks. Think Leonard Bernstein and his embarrassing belly crawl before a pack of amused Black Panthers in his own million-dollar Park Avenue pad 50 years back.

Behold the Democratic Party of 2020.  One can summon up all sorts of psychological reasons why otherwise competent, seemingly rational people embrace political stances that not only don’t work but literally don’t make sense. That is, if positive results are the goal. Perhaps it’s just a simple problem of poor math skills combined with  wishful, delusional thinking.  Promising to spend trillions that don’t exist in exchange for votes make for rough going when payment comes due. To paraphrase Margaret Thatcher’s basic adage about running out of other people’s money, socialism is wonderful until you have to deliver on promises that can’t be kept.

Sadly for the Left all up and down their corrupt spectrum, there are enough Americans of all colors, classes and sexes who can do simple math and are voting for old-fashioned employment, free association and self-determination, not utopian, fantasy “fixes.”

They could always try free market capitalism, but that means really giving Power To The People. And that’s never been the goal of the power-mad Left, has it? But don’t tell that to the Dem moderate. Their poor computing skills and naïve take on human nature dooms them to finding themselves repeatedly in unpleasantly close quarters with the Bernies and Black Panthers of this world. Historically terrible ideas of varying degrees, like birds of a feather…