UPDATE 5/26/21: Goldberg, the NY Times leading pundit heading up the Maskarading-Israel-hating-Leftist-formerly-known-as-a-Jew beat, is at it again. This time, it’s the revelation that Hamas’ renewed attacks on Israel are “a gift to the Right.” In other words, what disturbs her about Israel fighting for its life is that it might arouse the decency and outrage of too many Left leaners with a sympathetic taste for self-determination and liberty in their souls. In GoldieClaws’ Orwellian world, we’re informed that anyone in Israel’s camp is a Nazi, but we can’t have people otherwise in thrall to the Liberal/Left crossing lines in support of those “apartheid” architects. This   potential abandonment and ensuing desolation of a congealed life-form like Goldberg resounds in every vicious anti-Zionist epithet she utters.

By the way, the spike in anti-Semitism according to this harridan? All dating from the moment Donald Trump took office in 2016. Natcherly. Projection on steroids. And once again, as if one of Satan’s marked messengers on earth, there are those hideous talons again. 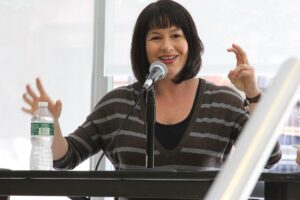 UPDATE 9/8/19: It’s official from the always reliable Michelle Goldberg-it’s all those Neo-Nazi White Nationalist Trump supporters who are the anti-Semites, shooting up synagogues. The Dem Party with its Israel-hating Squad and the Woman’s March leadership? Nothing to see here.

ORIGINAL POST 5/20/18: Here’s another political activist masquerading as a no-talent “journalist” who’s given up her religious & cultural heritage in favor of the Holy Religion of Leftism. In another NY Times screed preceding the splattered barf bag just tossed all over Israel, she lays out her very own “facts” proving that the Left has every reason to hate Trump while the Right has had no reason at all for opposing Obama’s agenda. When you’re a Leftist, one is entitled to shift reality at one’s convenience. And one is never wrong, regardless of results.

Rubbing up against this sorry package, one need know nothing more about clueless American Jewry, excited to see their friends guillotined as they join the shrieking mob in praise of their wanton killers. Leftist first and foremost, Jewish-American last…if at all.