UPDATE 12/22/18: Much too long since last update on Michelle-Antoinette’s heart-stopping fashion scares, but out she came last week, looking like a slow-moving caisson of regurgitated lemon pie filling. Add to that sartorial coup-de-grace a pair of glittering $4000 hip boots by Balenciaga…

The occasion for the sensational boots ‘n canary wrap combo was a grand finale in Brooklyn for her $65 million book tour, a cozy follow-up to that $50+ million Netflix deal. Recall this is the couple who incessantly have counseled their millions of mindless followers to forego the soulless, profitable corporate world for a life of sacrifice and public service. Just like the Obamas. As Barack scolded the greedy amonst us, “I do think that at a certain point, you’ve made enough money.” They just haven’t quite reached that point yet. As our nation’s most prominent Grifters (now just pulling ahead of the Clintons), the Obamas remain object lessons in what money can’t buy…which includes taste, honesty and character.

UPDATE 7/2/17: When it comes to prominent women & fashion in DC, something’s changed since last Fourth of July. Hard to pinpoint just what…. 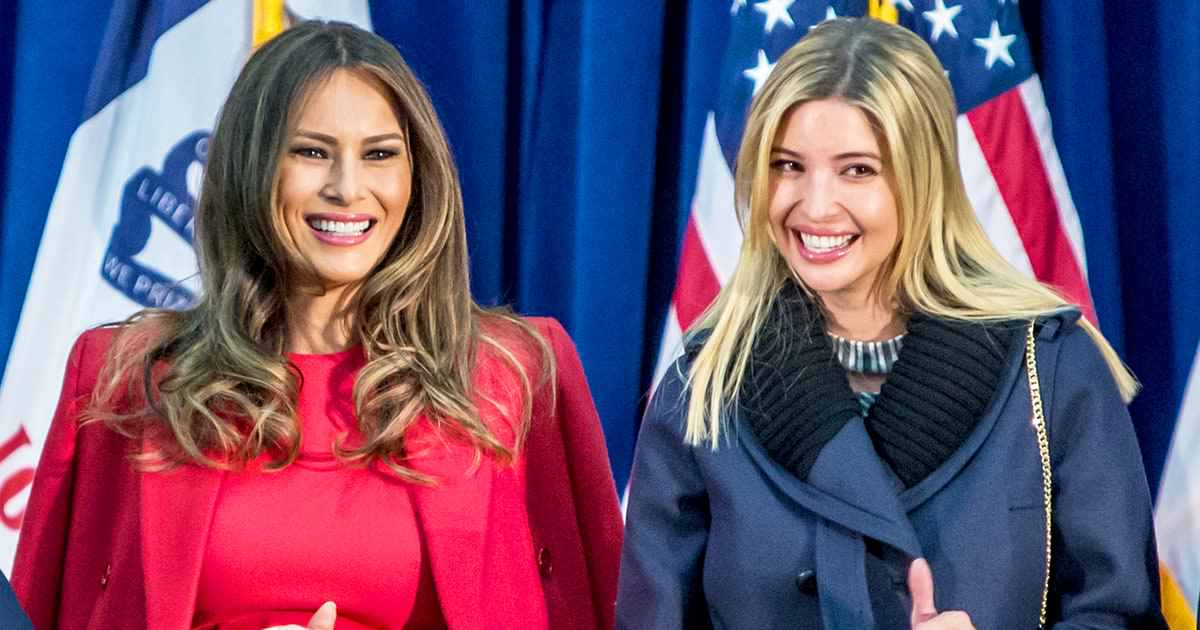 UPDATE (1/8/13): So sensible, so practical, so like you and I and the rest of us taking $7 million Christmas vay-cays in Hawaii courtesy of the U.S. taxpayer…

“… If the FLOTUS is cool with wearing the same dress twice on vacation, we are definitely going to start packing light. There’s no need to cram loads of wardrobe options into an overstuffed suitcase when you can look this good over and over again in the same dress.”   Riiiiight?! Right. 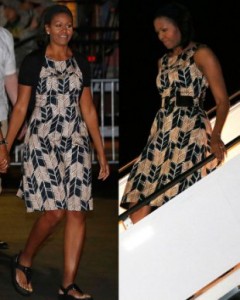 Lovely to look at… 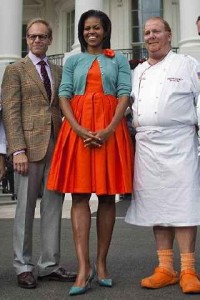 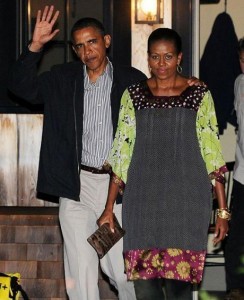 And heaven to kiss… 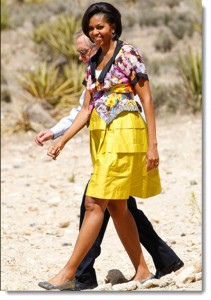 Is quite my most impossible scheme come true…. 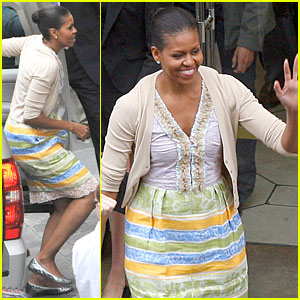 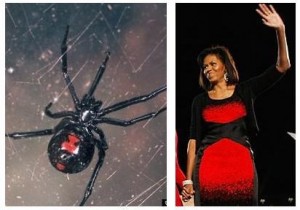 You’re lovely to look at… 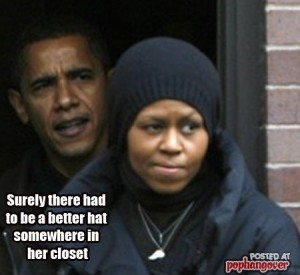 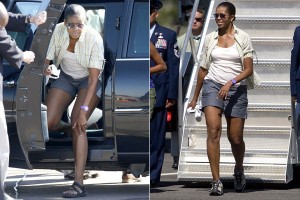 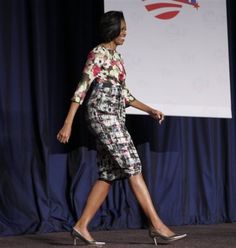 The moon is new… 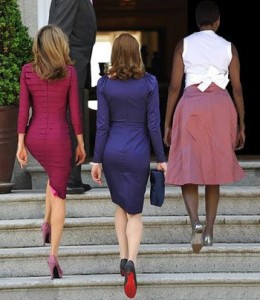 And Oh! It’s lovely to look at you… 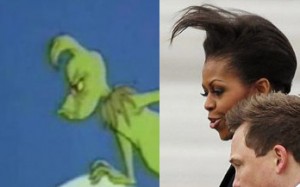 And here she is, shockingly chic and feminine…and totally inappropriate. With a sharp, conscientious eye to the solemnity of the occasion, our casual couple begrudgingly strolls for the cameras through Arlington National Cemetery on the 10th anniversary of 9/11: he sans tie, she in frills and carrying a cell phone in case her travel agent happens to call. 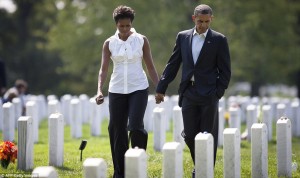 Reminiscent of her other stand-out appearance at the Arlington Tomb of the Unknown Soldier two years before where she takes a cue from Scarlett O’Hara by having her outfit made from the blue dacron curtains at Motel 6. 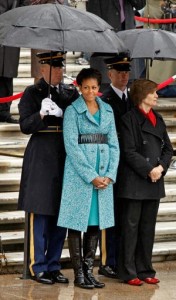 Not to be outdone by her American graveyard fashion coup, she wows London at another wreath-laying ceremony at Westminster Abbey. 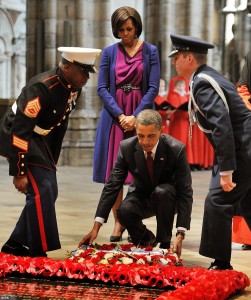 Heading to a glamorous dinner party? A Beyonce command performance at the White House? A luau honoring the Hawaiian geeks who doctored Barack’s birth certificate? Almost. The get-up you, I or anyone would pick for a Medal of Honor ceremony posthumously honoring a hero killed in Afghanistan. Oh, maybe she’s on her way to a big night out and is being held up by the annoying Medal to-do. All that for a dead soldier! 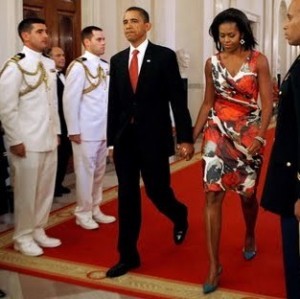 Here’s  that good old Obama-In-Your-Face thing of reminding us that some members of the great socialist brother & sisterhood are more equal than others. After all, somebody has to be queen, and it might as well be Mois-chelle-A! Only $2700.00 for a casual cardigan, and it probably comes in several different colors. 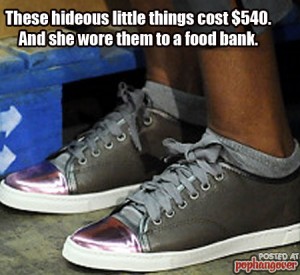 Marie-Antoinette got her kicks slumming as a common shepherdess while our Michelle-Antoinette gits down & dirty in “her” White House garden.

Live naturally, do without, have simple tastes, cultivate your garden, eat healthy and  wear old sensible shoes…currently only $950.00 at Jimmy Choos’ website, including stamped plaque on the back and “available without the fur lining.” 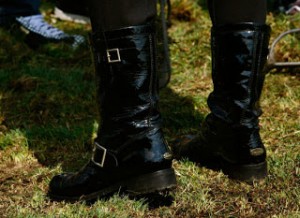 I show up at my kids’ PTA confererence, and all I come home with is this lousy $1,000 tote bag. 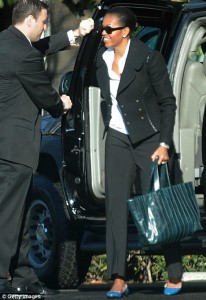 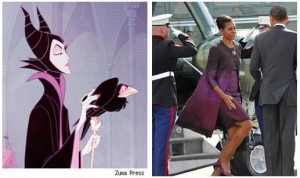 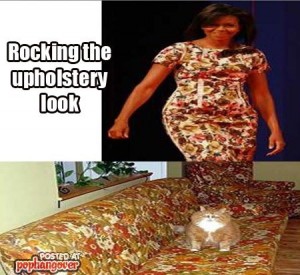 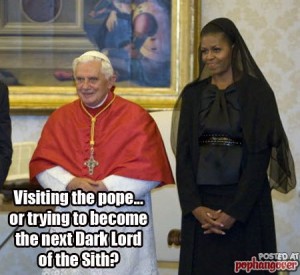 Something requiring serious forethought. Here she bonds sartorially with Gulf oil spill victims. Genuine empathy is a must for effective First Ladying! 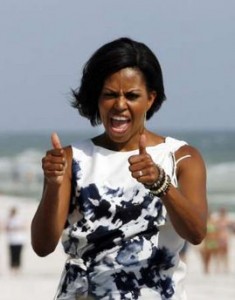 The difference is that the poor poodle had no choice in the matter. 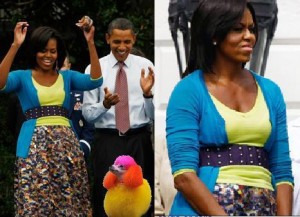 Imagine the unfairness of  “an image that people have tried to paint of me since the day Barack announced. That I’m some angry black woman.” 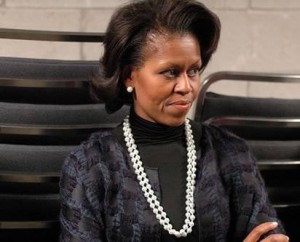 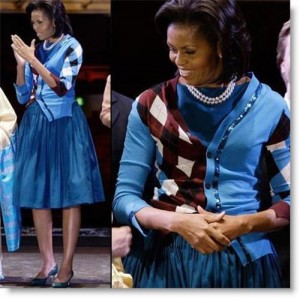 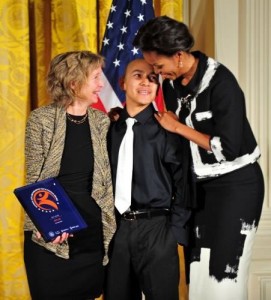 Bound for the White House Thanksgiving dinner table, this ample turkey is pulling all available strings to attain a Presidential Pardon. 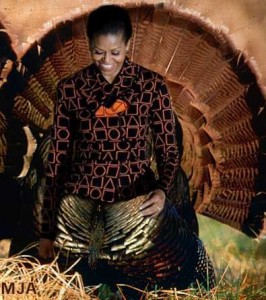 Special thanks to Moonbattery.com and Hillbuzz.org for a goodly portion of the fashion show. Do not miss Hillbuzz’s entire “Who’s Dressed Better” montage. And then there’s “Class vs. Crass.” 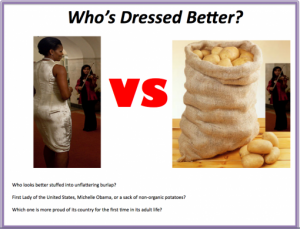