UPDATE 11/4/16: Lynch now the scrutinized Lynchpin covering up and blocking investigation into the elaborate Clinton crime web involving Hillary’s illegal private server which was installed to hide massive influence peddling via the Clinton Foundation while she was Secretary of State. Thanks to a refreshing vein of integrity running through the FBI, the shamelessly corrupt Obama/Lynch DOJ is itself now under investigation. And that includes Obama himself who knowingly lied when professing ignorance about Hillary’s private server.

UPDATE 7/6/16: Loretta just happens to bump into Bill Clinton at Phoenix Sky Harbor. What a small world. Golf. Grandkids. Spouses running for Prez feeling heat from law enforcement. One never runs out of things to talk about in certain circles. 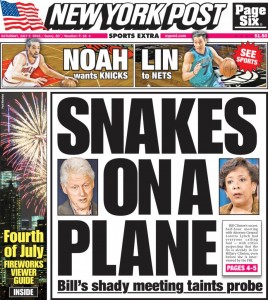 Obama’s new Attorney General, chief law enforcement official of the United States. Few signs of being anything but another Obama lackey, someone “as racially polarizing and constitutionally contemptuous as Eric Holder.” Tragically (for communities like Baltimore and Ferguson), another black woman into  “healing,” pardoning the rioters and not into the sustained law enforcement and self-control that young black men of the ghetto miss in their fatherless homes.