UPDATE 6/10/19: The street-walking panderer and bad actress does gay, giggly bartender in pursuit of the Rainbow vote. We’re all eager anticipation wondering what are the next embarrassing, dippy depths she’ll plumb. Apparently, there are no limits to what a desperate whore will do.

UPDATE 2/18/19: Just to reassure us that she’s not Donald Trump, the Street Walker chirps approval of tearing DOWN the wall. But she’s still for border security! She’s against it AND she’s for it!!! Can a mouth have more than two sides?

Try the words “Gillibrand” and “opportunist” on your search engine, and out pour cynical articles and quotes like nickels from a slot machine jackpot. This is how slim the pickings are if this (among many slim and slimy pickings) is the best the Democrats have to offer these days.

Gillibrand has made a career of rhetorical opportunism…”

“The larger question about Gillibrand, though, is whether she is too transparently opportunistic to be a viable candidate…”

“[Gillibrand] is an opportunist and a phony…” 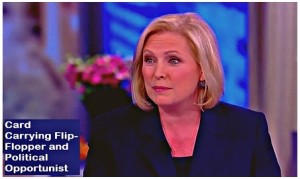 At least, no one has displayed the bad taste of calling her a “lying skank.” But one can safely state that Senatrix G’s career has been one of changing spots and positions, working both sides of the street, throwing those who put her in power under the bus.  A perfect example proving why women always tell the truth, are always to be believed and trusted…and superior to men in all regards. Or is it possible they’re capable of being just as rotten, just as corrupt? 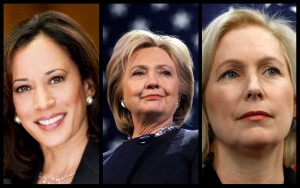