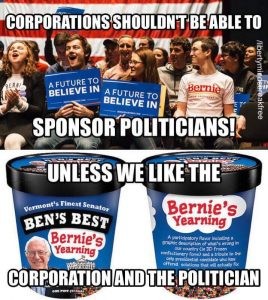 Ben (Cohen) & Jerry (Greenfield):  expensive (but tasty) ice cream capitalists and daffy far Left Progressive plutocrats, most lately, purveyors of a proposed new line of  radical MoveOn.org flavors to sit on the shelves alongside Cherry Garcia. All in service to electing far Left politicos to Washington. 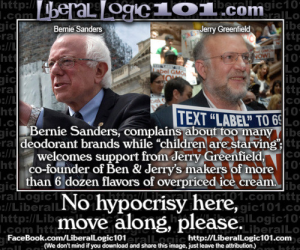 “We…need to send progressive champions to Congress who will fix our health care system with Medicare for All, protect clean air and water, and get big money out of politics.” No postscript on clarifying the higher morality of THEIR big money in politics.

One must ascribe the  paradox (aka hypocrisy) of the Rich Socialist to two possibilities: at worst he is really a despotic, thieving, controlling communist intent on killing all free market competition (precisely as he characterizes capitalists); OR at best, he still wants to view himself and be viewed as “progressive.” Which, to the terminally gullible, means Nice & Compassionate. (And then there’s the practical foresight of buying absolution and exemption from the guillotine, come the Revolution. Sometimes that backfires. You just can’t please everyone.) Note in their MoveOn.org pitch, Ben & Jerry specify themselves as “the people, NOT the corporation.” Nice. Compassionate. Unlike that avaricious pair of filthy rich robber barons, raking it in up there in Vermont. The agonizing schizophrenia of cheering on Bernie, Hillary and Che…and being a multimillionaire.