Before Barack, there was Jesse. One of the great modern American shakedown kings. A early participant in Martin Luther King’s historic and ultimately noble crusade for Civil Rights in the 50s & 60s, Jesse learned somewhere along the line that a permanently helpless bloc of disenchanted, mired-down blacks would provide him with both a lavish lifestyle and moral legitimacy. The Democratic Party under Lyndon Johnson shared his sentiments and goals. Here was the Big Chance: political clout and the opportunity to be a Player in the political sweepstakes. What would a Jesse Jackson do without millions of angry, disgruntled, disenfranchised black people? What purpose would he have if those people were actually encouraged to use their newfound Civil Rights in the 60s and pursue the American Dream like everyone else, no longer disadvantaged by the color of their skin and now judged solely by the content of their characters? For that matter what would the Democratic Party do without the same? This brings us to the sorry present of an Entitled American Majority.

And what of Barack & Jesse? Surely their shared noble idealistic goals for “their people” makes them bosom buddies, soulmates, fellow soldiers bonded in the foxhole by “The Struggle?” Actually, like two reptiles fighting for their territory, there is little love lost between them.

The persistent questions: how, one must ask about Jesse, Al, Barack & Michelle in their early days, do these people pay for their fancy clothes and limousines? For that matter, what keeps this particular pack of liars, frauds, extortionists in business? The answer is not blowing in the wind, but in something considerably less ethereal: 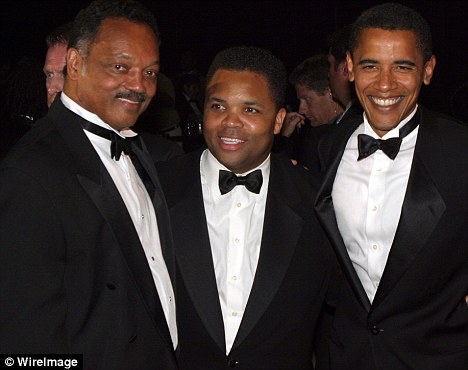