Seething madwoman and Obama’s perfect choice to be the in-your-face face of his Party. When asked the difference between today’s Democrats and Socialists, here’s her long-winded, vacuous way of saying, “None.” When caught rigging the nomination process in favor of Hillary over Bernie, Debbie has an equally palatable explanation.

Typical of today’s Lib Dem, Scary Hair Deb vomits out lies, threats and accusations of  “racism,” “misogyny” and all the usual Deplorables stuff with the noxious regularity of an incontinent cur. 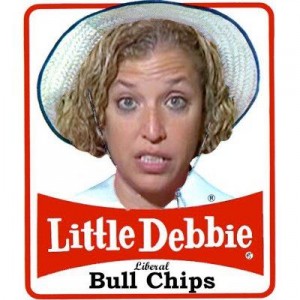 Like all sensitive members of her Party in the post-9/11 age, she has a special affinity for Muslims, bowing, scraping, apologizing to them, going so far as to give them full access to classified governmental material on laptops that suddenly disappear. Thus her current scandalous predicament, involving a whole family of Pakistani cons caught fleeing the country and implicating her. Naturally, this genuine scandal has been studiously ignored by the MSM. Nothing to see here. But strangely, her fellow Dems know rotten fish when they smell it and would like to distance themselves. We too would like Debbie, the Most Reverend Hillary, loopy Nancy Pelosi  and other such “feminist” icons of the Dem Party to go away but for different reasons. Dems think such female models of embarrassing deportment are bad for the Party. We think they’re bad for the country. 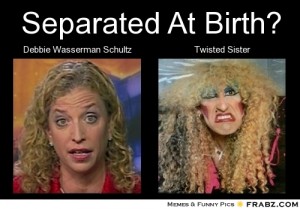