ORIGINAL POST 11/3/21: Cornel West, jolly contributer to the general gaiety of nations and his own bank account. Current going rate for the privilege of being race-baited, condemned, spat on, insulted, threatened and guilt-tripped by the engaging Dr. CW, Ph.D? Only  $25,000-40,000! What a bargain!

The lowdown on Mr. Shakedown, Princeton U chapter. Not one incendiary, profitable, heavily publicized “cause” or happening escapes his participation.

Formerly a loving Fellowship of Shakedown Artists…now star-crossed lovers. These days, Barack isn’t black enough for Cornel’s taste. And reconciliation is out of the question. Apparently, there’s room for only one Supreme Black Poobah, and it isn’t Cornel. He’s also learning you don’t bad mouth Barack. Even your fellow race baiters like Melissa Harris-Perry think that’s rather bad form. 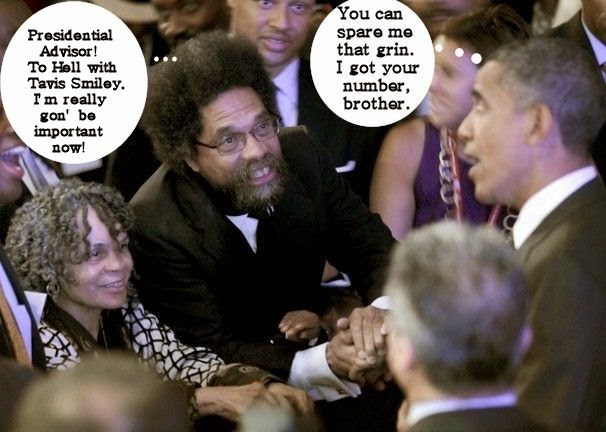 “… a self-proclaimed prophet who believes in the virtues of love and justice. But in his own life, he can’t seem to find either.”

Why would he want to? If there’s justice and love, the Cornel Wests of the world have nothing to hustle.