UPDATE 1/10/16: Naturally attracted to big time, high-visibility criminal types like himself, perennial Bad Boy Sean arranges an exclusive meeting with romantic Mexican outlaw El Chapo, billionaire drug lord/cold-blooded killer on the lam, only just recaptured. Who of us could resist the possibility of making a big, splashy biopic on one of the world’s worst human beings? It’s particularly telling that El Chapo sees in Sean a kindred spirit, a natural confidante and grants him a personal interview! Anyone who loves & worships Hugo Chavez has to be his kind of guy. No doubt the proposed cinematic blockbuster (starring Sean of course) will recount the “real” tale of this unappreciated, misunderstood Death Merchant. We’re given a sympathetic hint when Hollywood’s BFF to tyrants and murderers reveals in his humanizing, up-close-and-personal interview that El Chapo is merely an enterprising capitalist filling a demand, just a pragmatic apostle of supply side economics: “”If there was no consumption, there would be no sales. It is true that consumption, day after day, becomes bigger and bigger. So it sells and sells.” One can say the same of  much of today’s Hollywood and its overpaid, unhinged stars. El Chapo and Sean Penn: Reaganites!

Another sadistic bully/brat who somehow finds himself on the kind, compassionate, caring, generous, Leftwing side of the angels.

Always right there with a full camera crew to demonstrate proper philanthropy to the masses, Sean’s Hurricane Katrina Missionary Express yacht springs a leak on its first launch.

Not surprising that the famously petulant Mr. Penn finds himself very comfortable in the company of other tantrum tyrants, especially those who tyrannize whole nations. Ditto with big time Mexican drug lords. No sense hanging out with small-timers. 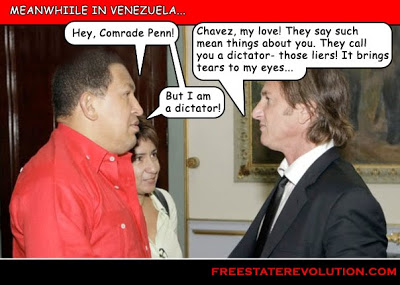 How to explain a Sean Penn? In his own disingenuously humble words, “I’m just another a—— trying to feel good about himself. And why shouldn’t I? That’s what everybody should try to do.” For his type, no good fortune, however vast, can satisfy an empty, hateful soul drawn like a magnet to the evil of absolute power.