UPDATE 1/30/19: Speaking as a successful businessman and to his credit, Schultz punctures the Marxist dream balloons of Free-Stuff-For-Everyone (and resentment/envy/avarice) floating virtually all his rivals for the Dem nomination. “UnAmerican,” he says. Correct. So he’s running as an Independent. Or so he says. Unfortunately, he is constructed as a Liberal Capitalist on a quasi-religious mission to spread “equality.” IF he sincerely changed that goal to the freedom that moved him from rags to riches, he’d be a formidable (and attractively American) opponent to Trump. IF. The man who pushed Race Chat as a side to selling coffee is not likely to champion freedom and responsibility over social engineering. Or maybe the threats his Starbucks baristas are getting for him straying from the Marxist plan will get him really ‘woke’ to what real progress (not Progressivism) is.

UPDATE 1/26/19: Surprise, surprise. Here comes Howard Schultz to Sunday night prime time, introducing a “serious” socialist billionaire hopped up on ID politics as the answer to the Trump nightmare. What more could America ask for than a “humane” capitalist who’s made Open Borders/Open Bathrooms a central operating procedure for his business? (See 5/13/18 update below.) Needle disposal boxes! Coming to a neighborhood near you! But undoubtedly not near him.

Without drinking in the overpriced, over-caffeinated ProgSwill he’s sure to be serving up, one can easily guess that he’s all for taking your money and giving it to strangers in order to buy votes for himself. Or just maybe, you’re one of those strangers hoping to be on the receiving end of this money-making scheme. What’s not to like?!

UPDATE 6/5/18: Howard’s stepping down from Starbucks, just in time to leave the Open Bathroom policy to someone else and…what else? Oh, ah, perhaps run for President. Perhaps on a platform of Free Coffee for the masses. And the right for everyone and anyone to camp out on your front lawn. Fortunately, or unfortunately, pragmatic Democrats are not so keen on his radical, fiscally impossible agenda.

UPDATE 5/13/18: Open Bathroom Door policy at all Starbucks for the non-paying homeless? Really? Can Schultz actually be a mole for Dunkin’ Donuts? Will that generous invitation extend to the White House comfort stations when Howie is President? And where do they all “go” when all those burnt coffee dispensaries shut down en masse to protest racism…or poverty…or elections that don’t turn out according to plan?

UPDATE 9/7/17: Starbucks growth now so sluggish that it is compelled to pander to a less “Progressive” audience. Instead of drawing in the Luvvie crowd teary-eyed over Muslim refugees, the Starbucks “discussion” now has swung completely over: buying super-expensive advertising super-friendly to unemployed Vets on Fox News primetime. Perhaps Howard is about to announce his candidacy.

Howard Schultz: most definitely someone to keep an eye on as the Democrats’ billionaire businessman answer to The Donald. We’re especially tantalized to hear from those in the know that he’s “inherently a more serious person” (as all Liberals inherently are. Ask them.)

This Champagne Socialist (more precisely the ground zero “Latte Liberal“) has just stepped down from his head post at Starbucks  to plan his Presidential run. Naturally, Schultz will be running on his credentials as a Big Business Progressive, preaching all the feelgood stuff about hiring those “refugees” that mean ol’ Donald won’t let in, encouraging “conversations” about racial and income equality…but not quite measuring up in actual practice.

The problem with Progressive paragons of “inclusiveness” like Schultz is that they tend to exclude anyone who isn’t a Progressive aka Hillary’s now-fabled Basket of Deplorables. And at last count there were 63 million of us. We shall be patiently waiting to see what the Dems’ next rich Socialist figurehead has to offer “all of us.” 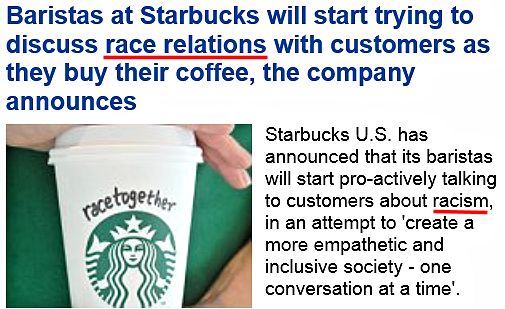