Proudly putrid Acid Queen enthusiastically adopted by Obama administration to force-feed the Leftist gay political agenda under the mendacious anti-bullying banner: “It Gets Better.”  Predictably, the real, unmasked face of this totally politicized cause is this….

…a surly, vicious bully. A perfect member of the Obama Mafia Family of bureaucratic bullies, warmly welcomed into the fold by HHS Secretary Sebelius and Obama himself! Who dares criticize a gay man lobbying for the humane treatment of insecure teenagers? For a Leftwing administration intent on amassing millions of youthful idiot votes, It Doesn’t Get Better than that.

Temporarily useful for the masses of young voting blocs he might coalesce and attract, we advise that you enjoy your short-lived notoriety, the visits to the White House and the yummy amounts of cash you’re raking in because really, Dan, who of any substance in the long run will want to be around a bitter loser like you? UPDATE (3/30/15): A naïve rhetorical question since apparently Disney has decided Dan is to be a producer for a show of his own, “Family Of The Year,” based on his own exemplary home life. There’s money to be made from PC hatred so long as it’s aimed at Conservatives & Christians. Uncle Walt is spinning molto allegro in his grave.

All part of the Gay Fascist trend: there’s the failed attempt to close down a perfectly nice business like Chick-Fil-A. Be clear that you are a Nazi if you are against their agenda to redefine the family and change anything else that suits them. Tolerance? Peaceful co-existence? Civil Unions? Civil Rights? Not good enough. And with the Supreme Court decision validating gay marriage nationwide, stay tuned for a quantum leap in anti-Christian, pro-gay litigation.  Like the pimps & madams of the Black Grievance industry, nothing can ever be enough for the Gay Mafia  when agitation and misery are the seeds they sow and a way of life. 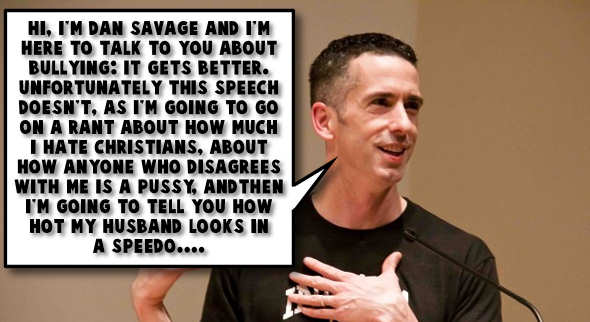