The cinematic auteur who has made nihilism, anarchy and gratuitous, chaotic violence hip, cool and very, very “funny” for those with an elevated consciousness. For those of us with a more conventional disposition and outlook, he’s just another art world hustler/hack with a gimmick home-cooked & served up hot to a lot of self-styled sophisticates looking for the next New Thing. 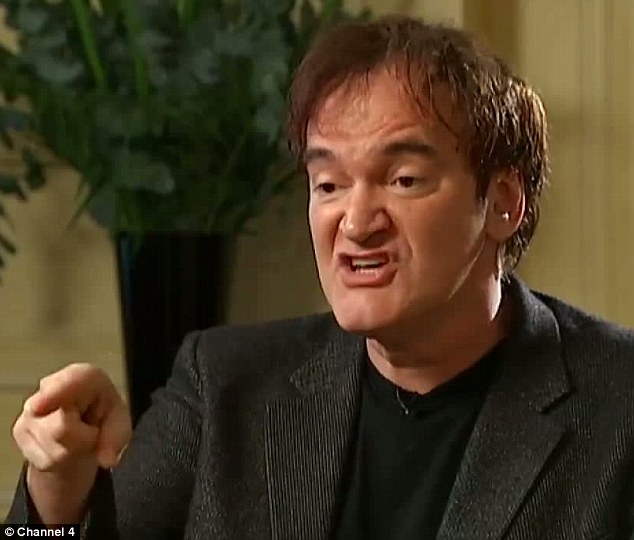 With millions in his bank account and an obtuse public & press fawning over his every word, Quentin sometimes forgets his good manners and accuses even polite British interviewers with dark Indian skin of treating him like a black plantation slave for asking, in the immediate wake of the Newtown shooting, a question about his special fondness for violence. Abused like chattel by a British journalist!! How cool is it for a bored celeb like himself to really feel like a character out of “Django Unchained?!” A Method director, living out the slave experience in a 5 star hotel suite…or perhaps in the oppresive presence of a BBC interviewer! Staying very much in character, Quentin fights back like Nat Turner! He informs his tormentor that “I’m shutting you down.” Inspiration for uprising slaves [and spoiled Hollywood types] everywhere!!

This is what happens to some of these Hollywood frauds for whom the line between normal human experience and their own overpaid, overpraised, limitlessly privileged existences just doesn’t exist. Living in their bubbles of absolute power and totally unearned influence, it’s small wonder they think they are qualified to rule over the rest of us pinhead fools.

The ever insightful, entertaining Mark Steyn comments in an interview with Hugh Hewitt:

HH: Quentin Tarentino is very defensive about Django Unchained. It is the most violent movie I have seen since Straw Dogs. It is relentlessly violent and gun-filled. And he’s very touchy in the aftermath of Newtown to people saying that which happens on the screen has any impact on the losers in the world. What do you think of that argument, Mark Steyn?

MS: Well look, Tarentino is an idiot. I said, I didn’t think Reservoir Dogs was a great movie. I think in a sense, he’s the Mantovani of violence, that he kind of makes it into easy listening Muzak. And if you look at what he’s done with the Civil War, this latest film, he’s not in the least bit interested in the Civil War, because that would require reading a book. It would require doing something other than watching other movies. So he’s used the Civil War as a pretext for his kind of homage to spaghetti westerns. And that’s kind of cute in a sort of postmodern joke kind of way. But of course in doing that, you utterly trivialize the actual lived experience of 19th Century America. He’s utterly trivialized that in order to make a film about how he feels about other films. And that kind of ironic pose actually is not disconnected to the kind of twerps you see deciding they’d like to go out in a blaze of glory shooting up a schoolhouse. That is a film about nothing. And when you have violent films about nothing, and then suddenly you start having violent school shootings about nothing, where people are prepared to kill people not for any cause or anything, but as an act of theater, then I think that is worth pondering, and he should be defensive about it.

2 Replies to “Quentin Tarantino-
The Mantovani of Violence”