UPDATE 11/6/21: Scary political scenarios and prophecies like “Who Owns The World?” abound, and one must sort out what is real and what is paranoid or just dramatics. Simple math should make anyone anxious at the wide open border flooding of foreigners into our social welfare system. This is the evil Cloward-Piven strategy formulated to bankrupt the capitalist system and turn us all into faceless ciphers of totalitarian serfdom. 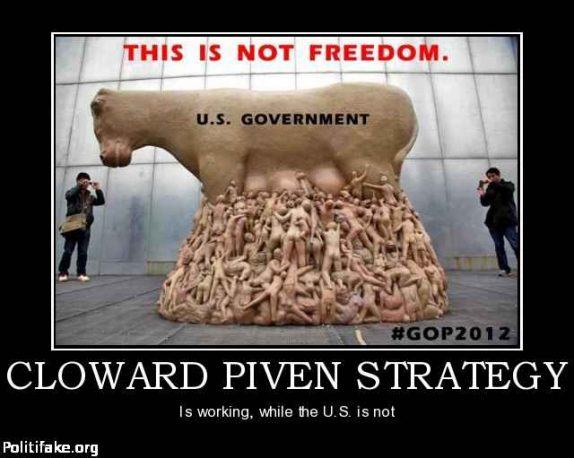 UPDATE 3/21/21: Cloward-Piven is cool again. For the Great Reset, it is the ideal, diabolical strategy to bankrupt the country, turn us into a totalitarian Soviet USSA with basically no private enterprise, just one big welfare state funded by what few productive individuals and businesses manage to continue functioning. Now you get why those Dem mayors and their overseers in Washington encourage and studiously ignore all those riots across the country. 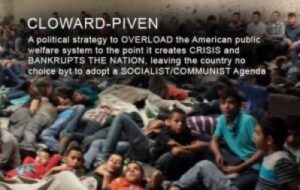 UPDATE 1/11/18: Jerry Brown’s rotting Sanctuary State described by Linda Goudsmit as “the Cloward-Piven strategy on steroids”, a cheery template for a future New York & Illinois. Can one blame the “Resistance” for hating DJT derailing its nihilist dream for America?

UPDATE 3/19/17: Too mean and viciously bitter to die, Piven’s idea of a good time is still the thought of poor people’s businesses and lives going up in smoke for The Movement!

ORIGINAL POST 11/5/12: Little Red Riding Hood was lucky to have only a bloodthirsty wolf in Grandma’s bed compared with this champion of burning down cities and orchestrating other crises for The Cause. Forget about big teeth or furry paws. My, my, what evil intentions you have, Granny Franny!