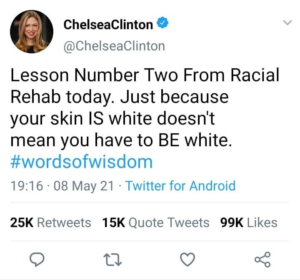 UPDATE 4/20/17: Curiously desperate further attempts to make Chelsea something, anything. As one link specifies, she lacks her father’s charm and her mother’s ruthlessness and possesses little talent if any. She is simply a spoiled brat.

UPDATE 4/6/17: Worldly wise veteran of 1001 visits to the hairdresser, her manicurist, Whole Foods and the plastic surgeon, professional phenomenon Chelsea dispenses advice to young women about one thing she knows absolutely nothing of: earning a buck.

UPDATE 3/18/17: More stultifying even than her moribund Mom, Chelsea being touted as a political comer. Fine with those of us applauding whatever further accelerates the implosion of the Dem Party.

Now a fully credentialed member of the Michelle-Antoinette class. Who is more deserving than a deeply superficial, pampered heiress with celebrity parents who unblushingly gushes, “I was curious if I could care about [money] on some fundamental level, and I couldn’t“?

She just couldn’t. But she was curious. Surely, all 30-something millennials and the rest of us older drones can identify with such curiosity:  $600K annual salary from some network or other to do what’s she’s born to do…nothing!  Fer sure! The rest of us who actually have to meet budgets and pay bills ourselves really, really relate to $3 million weddings (paid out of “charitable” Foundation funds) and buying modest $11 million townhouses as starter homes for our new families.

To be a rich Share-Someone Else’s-Wealth Socialist, one must be above & beyond such concerns as budgeting and financial worry. This admirable spawn of one Bill and Hillary certainly deserves a place among the entitled Elite who comprise the bothersome Michelle-Antoinettes of this world. One suspects she will amount to little beyond being someone’s daughter, the lifelong recipient of large  checks from Mummy & Daddy’s “philanthropic” slush fund. But at least she has made the valiant effort to be curious about money. It certainly beats having to go out and make it.

2 Replies to “Chelsea “KAREN” Clinton: A curious snow flake with a gluten aversion”