UPDATE 1/29/17: Sadder and sillier yet. Aspiring Senator Judd goes fullbore bonkers at the Mean Girl March hoping for a little career boost, hopping up and down, hopping mad in both senses, reciting Nasty Womyn “poetry.” Rumor has it she travels with her own shrink. Bored, overpaid, mildly talented actors can afford self-indulgences like that.

UPDATE 4/1/13: Silly girl, empty girl…and as of April Fool’s Day, 2013, “the timing just isn’t right” to become a Senatrix. Some nasty dems attributed some nutty quote about being raped twice to her that she just won’t own. Nossir! As a last resort, she’s reached for that old reliable, heartwarming thing about spending more time with her family. Thing is: she’s estranged from her mother and sister; she’s proudly childless because “it’s unconscionable to breed” in this hopelessly overpopulated world[see link below]; and she just divorced her husband. Who’s left? Her “family’s” gain, our loss. A tragedy for her 14 fans, a good chuckle for the rest of us. And the end of an unpromising political career which, in these surreal times, might have come to pass.

A laughable example of a little ol’ suth’un girl taking on the Liberal Yankee Hollywood weltanschauung with a vengeance. I’m famous! I care! I’m running for office! And not just any office: the U.S. Senate!! Understandably, if Al Franken can be a U.S. Senator, then absolutely, positively ANYTHING is possible in America, even for Ashley. Her decision to seek an office higher than the one on Wilshire Boulevard where she keeps her stacks of autographed headshots coincides copacetically with dumping her race car driver husband. 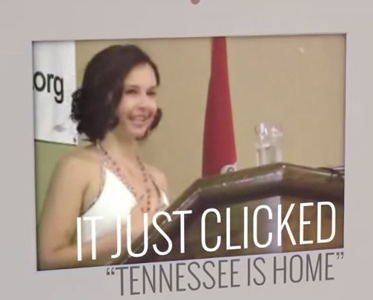 Er…I mean Kentucky. Y’know, whatever!! Who can tell all you hillbillies apart?

For Tennessee…er…Kentucky Democrats, Judd rhymes with “Thud!” Thankfully, our serious suffragette  doesn’t have the tiresome baggage of children, having preached to all of her flock from the pulpit that ‘It’s unconscionable to breed, with the number of children who are starving to  death in impoverished countries.”

Maybe, in this upside-down Age of Obama, Ashley will have the last laugh, but right now, the laugh’s on her.