UPDATE 6/18/21: Why is Maher suddenly making consistent sense? This time he’s congratulating America for its progress in race relations and dissing the Left for refusing to acknowledge that reality.

UPDATE 6/12/21: Bill gets it right again? Wassa matter wid him? He’s making perfect sense, blasting the idea of free college which could be expanded to the larger concept of Free Stuff For All that drives today’s Socialist Democratic Party of America.

UPDATE 4/17/21: It’s the second time in recent weeks that this stopped clock has been right, praising FLA Governor DeSantis for letting children go to school as opposed to those lying politicians stopping all healthy life in the name of “safety.” “Just facts,” he calls them, and we begrudgingly give him credit for the simple act of telling the truth.

UPDATE 3/21/21: Stopped Clock Nasty Man gets it right on America, China and Woke Silliness for one of his allotted two minutes of correctness per day. 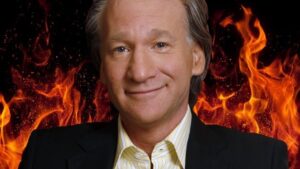 ORIGINAL POST 5/3/20: Through pure oversight, the Oh-So-Easy-To-Loathe Bill Maher has gone missing his own profile here at Michelle-Antoinette (until just now) as a prominent MSM stooge for Progressivism and the prevalent Hate Trump culture of the Left. He has merited a few lines elsewhere, but now has his own home here for almost certain updates to his distinguished resume. Welcome officially to the Hall Of Shame, Bill!

Still flattering himself as an enemy of PC, Victim Culture and lying in general, Bill finds himself neatly fileted and served up for dinner by Texas congressman Dan Crenshaw, fully armed with facts. In this case, it’s Blaming Trump (Oh Bill! SO brave, SO original, SO edgy!) for CoronaCrisis and Republicans in general for Suppressing The Vote in Texas (now the all-purpose go-to excuse for any lost Democrat Party election).